“God does not have to come and tell me what I must do for Him, He brings me into a relationship with Himself where I hear His call and understand what He wants me to do, and I do it out of sheer love to Him… When people say they have had a call to foreign service, or to any particular sphere of work, they mean that their relationship to God has enabled them to realize what they can do for God.”
– Oswald Chambers –

A Brief History of the Dillons

Meghan grew up in a Christian home, dedicating her life to Christ shortly after high school. Scott was raised in a non-Christian home and trusted Christ during his sophomore year in high school. The two met during those years through a drama ministry program at Meghan’s church. Growing to be good friends, the Dillons were married in the fall of 2003. Scott graduated from University of Northwestern with a B.A. of Intercultural Ministries and is currently pursuing a Masters of Thelogical Studies at Reformed Theological Seminary. 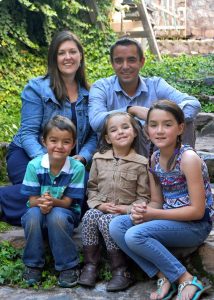 In 2014, Scott was ordained as a teaching elder in the Reformed Presbyterian Church of Peru (IEPRP). Their passion for the intercultural ministry has grown increasingly through their years on the missionfield. They have three children: Rachel (7/3/2007), Mark (5/21/2009) and Penelope (12/8/2010)

Scott and Meghan work primarily with and through an MTW-partnered church in a lower-income neighborhood of Cusco called San Jeronimo. In 2013, the church ordained their first national Cusqueñan pastor, Elisban. This was a fruit of many years of investment by the missionaries in Cusco and Scott continues to work alongside Elisban in ministry. Since 2013, Scott has focused on further leadership development in the church by adopting a program that focuses on the three major areas of development: personal character, ministry experience, and academic prowess.

Scott is a pastor in the Iglesia Evanélica Presbiteriana y Reformada en el Perú. He is the only non-Peruvian ordained in the denomination and it gives him a unique opportunity to minister in an incarnational way. That is, it allows a missionary to be an equal among the ministers. This also allows him to plant a church within the denomination and not plant it as a missionary alone. The church, Iglesia Fuente de Gracia, was inaugurated in September, 2015.

Jesus’ model of discipleship was intimacy through friendship and example, not programs and events. The Dillons’ model of discipleship is the same in that they approach ministry to individuals as a relationship that starts with a simple, but powerful, friendship. This actually works very well in the Peruvian culture where the relationship between people determines everything. Ministry is relational and starts with a churro, not a pulpit.

Scott founded Berea Seminary in 2011, which then opened doors to offer full-time classes in August, 2015. Berea was named after the disciples Paul and Silas found in Acts 17: men and women who received the Word with eagerness and searched the Scriptures on their own to discover the truth in the apostles’ teaching. The goal is to raise the same type of leadership: men and women of the Word.

Berea Seminary provides classes in theology and ministerial training with curriculum provided by Miami International Seminary (MINTS). Most semesters have around 8-12 students. Plans for the future include increased space, online courses, and visiting professors from the U.S.

Peru is one of the first fields to develop a field council, which effectively replaced the Country Director position at the mission agency. The council allows the role of Country Director to be shared among equals and function more like a session (although it is not a church court). Scott is the coordinator of the Field Council, providing vision, direction, and accountability.

Scott also serves in a similar capacity for the Cusco team. He shares the local field leadership with David Daniel, but together they lead one Cusco Team.